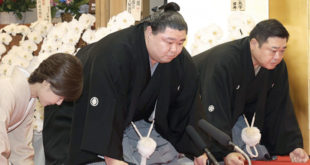 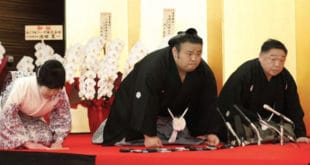 Following news of his impending promotion to ozeki, Asanoyama said Monday he had accomplished one of his career goals.

A Japan Sumo Association advisory board recommended the 26-year-old sekiwake for promotion following his 11-4 finish at the Spring Grand Sumo Tournament on Sunday, making his ascent to the sport’s second-highest rank a formality.

« I was aiming to become an ozeki. I have achieved one of my goals, » Asanoyama said.

While he fell one win short of the 33 victories over three tournaments normally necessary for ozeki promotion, the Toyama Prefecture native earned commendations for the quality of his sumo.

He remained in title contention until the closing stages of the Spring Grand Tournament, which was held behind closed doors at Edion Arena Osaka due to the coronavirus pandemic.

The meet, won by yokozuna Hakuho, was also notable for featuring just one ozeki, Takakeisho, after other recent holders of the rank had been demoted or retired.

Standing 1.88 meters and weighing 177 kilograms, Asanoyama has exhibited solid technique and impressive physical strength on his way to becoming one of sumo’s rising stars.

Wrestling out of the Takasago stable, he has won one Emperor’s Cup, at last year’s Summer Grand Sumo Tournament.

The JSA will formally decide on his promotion at a meeting Wednesday to determine rankings for the May tournament. 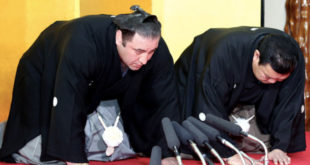