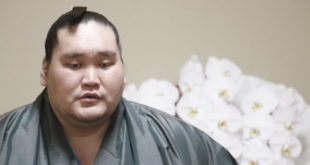 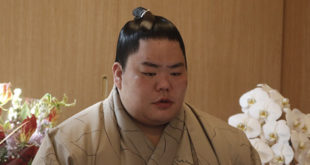 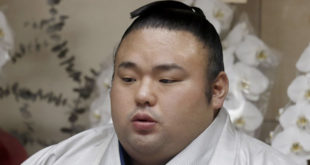 Goeido became the first kadoban ozeki ever to win the Emperor’s Cup with a 15-0 record after defeating Ozeki Kotoshogiku on Sept. 25, the final day of the fall tournament.

The victory marked the first time in 20 years — since the 1996 victory of then Yokozuna Takanohana in the fall tournament — that a Japanese-born sumo wrestler won a tournament with a perfect record.

Goeido will try to earn the title of yokozuna in the Kyushu tournament, which kicks off Nov. 13 at the Fukuoka Convention Center.

« As of this morning, I felt run down, » Goeido said on Sept. 25. « But I was able to pick myself up mentally, and perform well. I told myself I’d enter the stadium and get fired up. »

Initially, Goeido’s opponent, Kotoshogiku, caught him on his left side, leaving Goeido in a difficult position. But having been released from the pressure of a tournament victory, Goeido’s body swiftly responded to the situation. He grabbed Kotoshogiku from under his arm and pushed him out of the ring. « Instead of thinking about the next tournament, I wanted to end this one with a good performance, » Goeido said. « I’m extremely satisfied. »

On the morning of the last day, Goeido looked radiant as he attended his morning practice. The previous night, he’d responded to over 200 emails congratulating him for his tournament win, but without getting carried away over his victory, went to sleep at 12:30 a.m. He also carried on his practice, which began with the March spring tournament, of not drinking alcohol during a tournament. « It’s fun to drink with others, » Goeido said. « But I thought that there could be something to gain from abstaining. »

Even after he secured his tournament victory on Sept. 24, Goeido had just one glass of beer that evening. That was the only alcohol he consumed during the entire tournament.

In the next tournament, Goeido will be aiming for the title of yokozuna. « It’s quite something that Goeido netted a 15-0 victory. It must have boosted his confidence, » said Japan Sumo Association (JSA) Chairman Hakkaku. « I hope he keeps this momentum up through the Kyushu tournament. »

Since the third Wakanohana in the 1998 Nagoya tournament, no Japanese-born sumo wrestler has been promoted to the highest rank, known as yokozuna. Kisenosato and Kotoshogiku, both Japanese-born ozeki, performed poorly at tournaments that were crucial in getting them closer to yokozuna status. However, Goeido, with his ability to do well at critical moments and his dedication to self-management, has reaped results. Asked at a party after the tournament what he wanted to do most, he said with a smile, « First, I just want to relax. »

Goeido will have a short time to take it easy, but then it’s off to Kyushu, where he’ll go for the yokozuna title. 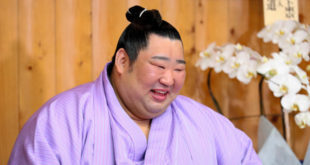