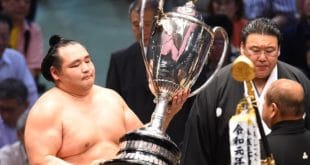 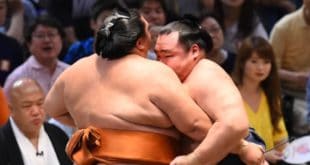 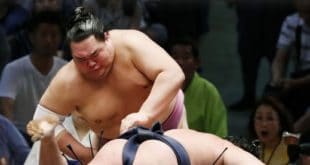 Takayasu plows over Ikioi for 1st win as ozeki

Takayasu plows over Ikioi for 1st win as ozeki

Takayasu earned his first win as ozeki on the second day of the Nagoya Grand Sumo Tournament, overpowering third-ranked maegshira Ikioi on Monday.

A night after stumbling against Hokutofuji (1-1) to start the 15-day meet, Takayasu left nothing to chance against Ikioi, whom he had beaten nine times in 13 past meetings.

Takayasu barreled square into Ikioi’s chest from the tachiai and never let go of his opponent, bulldozing him off the mound in a flurry to the delight of the Aichi Prefectural Gymnasium crowd.

On Tuesday, Takayasu will take on komusubi Kotoshogiku (0-2), against whom he has a career 9-11 record. Kotoshogiku lost to yokozuna Kakuryu (2-0) on Monday.

Takayasu’s Tagonoura stablemate, yokozuna Kisenosato, also bounced back from an opening-day defeat, beating No. 1 maegshira Takakeisho (1-1) — but looked far from being 100 percent.

Kisenosato won a slap-fest against the feisty Takakeisho, whom he sidestepped to bat down in their first career matchup.

But Kisenosato — who pulled out of the last tournament in May with an injury to his left chest and upper-arm area — winced every time he had to go to his left hand, portending possibly another difficult basho for the grand champion.

Yokozuna Hakuho demonstrated his class in improving to 2-0, outmuscling Tochinoshin (1-1) to lift the second-ranked maegashira beyond the ropes.

The victory was the 1,038th of Hakuho’scareer, moving the Mongolian within nine of Kaio’s all-time win record, which the 38-time Emperor’s Cup winner could very well break at this tourney.

Yokozuna Harumafuji remained winless through two days after falling to top-ranked maegashira Shodai (1-1) in the day’s final bout. Shodai scored his first career kimboshi, a win by a rank-and-file wrestler over a grand champion.

The two other ozeki in the field, Terunofuji and Goeido, slipped to their second defeats in as many days against sekiwake Tamawashi (2-0) and komusubi Yoshikaze (2-0), respectively. 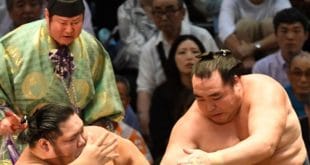