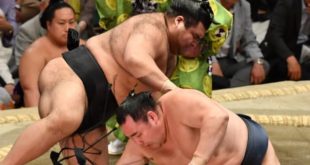 The Georgian, who could be promoted to the rank of ozeki with 10 wins here, won a battle of muscle over mass to hang onto his sole lead ahead of the Mongolian yokozuna duo of Hakuho and Kakuryu. No. 11 maegashira Chiyonokuni was also a win back after eight days at Tokyo’s Ryogoku Kokugikan.

Tochinoshin moved a mountain to earn his eighth win, holding off fellow sekiwake Ichinojo after starting off on the back foot against the 225-kilogram Mongolian. Surrendering an underarm belt hold at the start, Tochinoshin dug in and stalled his opponent’s progress at mid-ring.

With a long stalemate appearing in the cards, Tochinoshin rewrote the script. Although his attempt at an overarm throw failed to topple Ichinojo, it broke the stalemate.

As Ichinojo struggled to keep his feet, Tochinoshin slipped both arms under his opponent’s for a double « moro zashi » hold on the back of the sekiwake’s belt. Firmly in control, Tochinoshin forced Ichinojo back to the straw and eventually rocked and hoisted him backward over the straw bales to a fourth defeat.

« I wasn’t in synch at the start, but I was able to turn things around, » said Tochinoshin, who won his first career championship in January.

Hakuho, eyeing his 41st career grand tournament championship, had to battle from start to finish to overcome Yutakayama. The winless No. 3 maegashira held his own in a contest of slaps and shoves with the yokozuna.

With his right hand on the yokozuna’s throat and the thumb on his windpipe, Yutakayama drove Hakuho back. The maegashira then lowered his head like a battering ram and lunged forward. But the technique that had failed to drive out Tochinoshin on Friday, fared even worse against Hakuho. The yokozuna dodged the blow and his furious counterattack drove Yutakayama from the ring.

Kakuryu, on the other hand, easily stayed one win off the pace, grabbing No. 4 maegashira Chiyotairyu’s belt on the opening charge and flinging him to the sandy surface.

Ozeki Goeido suffered his fifth loss, shoved out by No. 3 maegashira Daieisho (2-6) and increasing the chances that he will finish with fewer than eight wins here and have to fight to maintain his ozeki status in July’s grand tournament. 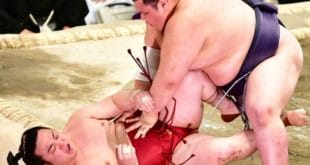 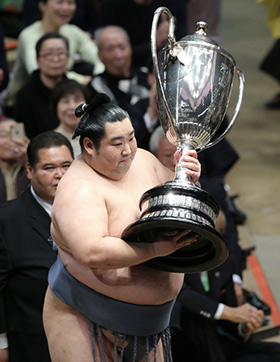