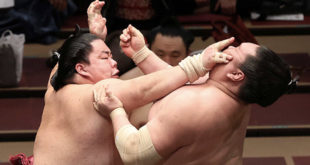 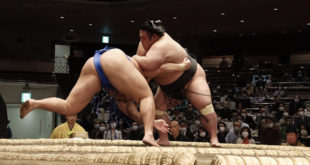 TOKYO (Kyodo) — Rank-and-filer Shodai snapped a seven-bout losing streak against ozeki Takakeisho on Monday to leave himself in a two-way tie for the lead at the New Year Grand Sumo Tournament.

Shodai (8-1), chasing his first top-division title, brushed aside one of his overnight co-leaders after Takakeisho (7-2) briefly bounced back in the final bout of Day 9 at Tokyo’s Ryogoku Kokugikan.

The No. 4 maegashira found himself on the ropes but stepped aside as Takakeisho thrusted forward, giving the ozeki a push from behind for good measure as he stepped out.

Takakeisho entered the bout with a 7-2 record against the rank-and-filer, having won their last seven match-ups. The ozeki faces No. 5 Enho in a highly-anticipated match-up on Day 10 of the 15-day meet, while Shodai takes on No. 7 Shohozan (5-4).

New Year meet surprise Tokushoryu (8-1) retained his share of the lead after defeating No. 12 Tsurugisho (3-6) and earned his first winning record in the top division since the Summer basho in 2017.

A pair of false starts appeared to rattle the grapplers but Tokushoryu seized control and drove Tsurugisho, fighting on a bad left knee, over the straw.

In addition to Takakeisho, two other wrestlers trail the leaders at 7-2 in the absence of grand champions Hakuho and Kakuryu, who pulled out of the meet earlier with injuries.

In other Day 9 bouts, popular division lightweight Enho faced and beat an ozeki for the first time, showing off his trademark agility against veteran Goeido (3-6).

Fighting as a career-high No. 5 maegashira, Enho (5-4) dodged Goeido’s initial charge and then pulled the ozeki around by his left arm and pushed him out from behind as Goeido fought to get back in the ring.

Goeido, troubled by his left ankle, is facing a demotion from sumo’s second-highest rank for the first time since he was promoted in 2014.

No. 6 Takarafuji (4-5) outlasted Takayasu (3-6) and ended the sekiwake’s hopes of securing an automatic return to ozeki.

The pair spent the majority of the bout locked up in the center of the ring, with Takarafuji slowly inching the struggling Takayasu toward this fate over the straw.

Daieisho took Asanoyama to the edge with a strong initial charge, but Asanoyama recovered and turned Daieisho around with a left-handed belt hold before finishing him off with an overarm throw.

Komusubi Abi (5-4) stunned Endo (6-3) and handed the No. 1 maegashira his second straight loss while improving to 7-2 over their nine match-ups.

The komusubi claimed his fifth win in seconds, charging out of the gates with outstretched arms to push out Endo, who started the meet off by beating both yokozuna and ozeki Goeido. 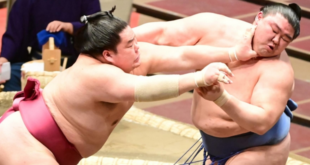