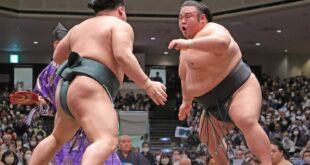 FUKUOKA – Yokozuna Hakuho won a record-extending 43rd championship and his first as a naturalized Japanese citizen on Saturday, taking out the Kyushu Grand Sumo Tournament with a day to spare.

The 34-year-old from Mongolia, who acquired Japanese citizenship in September and withdrew from that month’s tourney with a broken finger, claimed his first championship since going 15-0 in March.

Grabbing a left-handed belt hold on the charge, Hakuho stopped sekiwake Mitakeumi in his tracks and tipped him over backward in a matter of seconds. Mitakeumi, the September champion, had come to Kyushu with an outside shot of promotion to ozeki, but fell to his eighth loss.

“I prepared as well as I could. It’s been a long time since March, when I was hurt. After that I had the finger issue,” said Hakuho, who suffered his only loss on Day 2. “During that time I thought, and I thought, but in the end I stopped thinking and just executed.” Having been hurt in the March tourney, Hakuho sat out the May tournament and missed most of the Autumn Basho in September.

Hakuho entered the day needing either to win or for both No. 10 maegashira Shodai and komusubi Asanoyama to lose. Shodai lost his match to make it a two-wrestler race. Asanoyama, however, refused to go easily into that good night, battling back to earn his 11th win. Shodai lost a battle of former sekiwake wrestlers to suffer his fourth defeat. The No. 10 tried to rock No. 2 Myogiryu (7-7) back with a right forearm to the chest but lacked the power to make it work. Myogiryu absorbed the blow, wrapped both arms around Shodai’s torso and forced him out.

Asanoyama surrendered a belt hold as he drove No. 5 Ryuden (6-8) back to the straw only for his opponent to spin him around. But in the process, Asanoyama also got a secure hold on his opponent’s belt and was able to force him across the ring and out.

No. 1 Daieisho earned his eighth win, driving No. 6 Onosho (7-7) out of the ring with a powerful shove to the throat.

Komusubi Endo improved to 7-7, forcing No. 4 Tamawashi out to his seventh defeat.

In the day’s penultimate bout, ozeki Takakeisho (9-5) failed to earn his 10th win as he paid the price for an unimaginative charge against komusubi Abi (8-6). Abi forced the ozeki upward, spun him around and forced him out from behind.

No. 11 Ishiura (8-6) earned a winning record with a clever victory over Sadanoumi (7-7), who drove the 110-kg dynamo back to the straw but couldn’t force him out. Although Ishiura twice failed to twist Sadanoumi down, the effort compromised the No. 8’s balance and he was easily thrusted down.

Popular No. 6 Enho stayed alive in his hunt for a winning record. The 168-cm, 98-kg wrestler used his quickness and small stature to get under No. 14 Terutsuyoshi’s (8-6) arms on the opening charge. He seized the back of his opponent’s belt with his left hand and flung him to the sandy surface and a sixth loss.