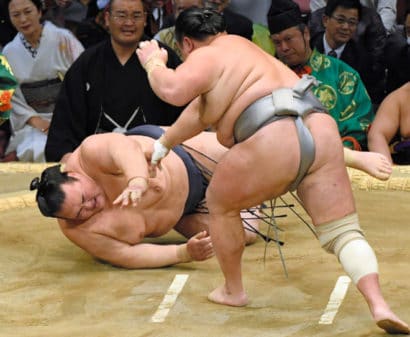 The loss against the No. 1 maegashira ratcheted up the pressure on the home-grown yokozuna, who remains winless since starting the 15-day tournament at Fukuoka Kokusai Center as the sole grand champion.

With Mongolian grand champions Hakuho and Kakuryu absent through injury, expectations had risen for Kisenosato prior to his disastrous start.

The yokozuna gave his opponent a strong shove at the opening impact, but seemed to lack power from the problematic left side of his upper body as the bout progressed.

With both wrestlers thrusting and shoving one another in the center of the ring, Hokutofuji knocked Kisenosato back with a palm to the throat before thrusting him down to the clay.

« That really wasn’t what I was trying for. I was just looking to wrestle well, and if (kimboshi) happens, it happens. I’m just trying to do my best, » Saitama native Hokutofuji said. « I just kept pounding away and moving forward. There’s a long way to go (in the tournament). »

The poor start is likely to fuel speculation about another withdrawal for the injury plagued Kisenosato, who made a successful comeback with a 10-5 record at the Autumn Grand Tournament in September.

It followed an unprecedented eight consecutive withdrawals from meets due to a left chest muscle injury. Prior to his run of absences, the 32-year-old had won back-to-back titles.

The second, in March 2017, followed his promotion when he became the first Japan-born wrestler to attain sumo’s highest rank in 19 years.

Ozeki Takayasu stayed perfect with a slap-down win over komusubi Kaisei (0-1-2), who sat out the first two days with a leg injury. Takayasu evaded an attempted belt grip by the big Brazilian before sending him to the ground with a slap to the back.

Tochiozan blocked an attempted shoulder blast at the opening, slipping to the side and using Goeido’s momentum to sling him from the ring.

The rank-and-file grappler said he would continue aiming to rise through the ranks, having been promoted after his last four tournaments.

Georgian ozeki Tochinoshin improved to 2-1 with a slap down against No. 1 Myogiryu.

The maegashira, who earned a kimboshi for beating Kisenosato on Day 2, wrapped his arms around Tochinoshin’s body but was forced to backpedal. The powerful ozeki took control after setting his feet, upending the smaller wrestler in 14.3 seconds.

Giant sekiwake Ichinojo (1-2) lost to fellow Mongolian Tamawashi, dropping to 5-6 head-to-head in their career. No. 2 Tamawashi won by force-out after lodging a hand on his 1.93-meter, 227-kg opponent’s neck and driving him back over the straw bales.

Ichinojo became the second high-ranked victim of the tournament for Tamawashi (2-1), who defeated Tochinoshin on the opening day.

Komusubi Takakeisho marched to a third-straight win, following impressive victories over Kisenosato and Goeido on Days 1 and 2, respectively.

Fighting No. 3 Ryuden (1-2) for the first time in the top division, Takakeisho quickly secured a thrust-out for his easiest win here so far.

After a hard initial impact, rank-and-file wrestler Nishikigi (0-3) tried to secure a double outside grip but was quickly driven out by the powerful Mitakeumi, whose status as a fan favorite continues to grow since a maiden tournament victory in Nagoya in July.