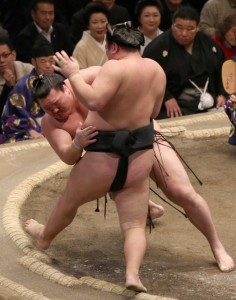 Unbeaten yokozuna Hakuho and Harumafuji grabbed their fifth wins at the New Year Grand Sumo Tournament on Jan. 15, with Kakuryu–who narrowly survived–and ozeki Kisenosato both one loss behind the leaders.

Hakuho was in control all the way against Ikioi, driving the maegashira No. 2 to the rim with a good hold on the front of the belt and forcing him to step out to defeat at Tokyo’s Ryogoku Kokugikan arena.

The yokozuna had a bit of a scare, however, since he fell flat from the momentum of his own attack. For a moment, it seemed he might have actually hit the dirt first.

The referee called it correctly in Hakuho’s favor, and a video replay afterward showed Ikioi’s heel did indeed touch out first.

Keeping his winning streak going, Harumafuji sent komusubi Tochiozan (1-4) to the dirt and tumbling off the raised ring in a brief and lopsided bout.

Kakuryu had a tough bout against hefty maegashira No. 2 Terunofuji, who grabbed the yokozuna’s belt with both hands and had Kakuryu off balance and fighting for his life several times. Thanks to superior timing and sheer endurance, Kakuryu capitalized on a brief moment of weakness on the part of Terunofuji (2-3) to shove out the rank-and-filer.

Kisenosato, fighting powerfully, used a series of thrusts high on Aoiyama’s chest to keep the Bulgarian off his belt and in a state of constant retreat until he eventually stepped over the edge. Despite his one loss, Kisenosato is performing fairly well and seems comfortable in his role as the primary ozeki in the ring these days. Aoiyama dropped to 2-3.

Struggling ozeki Kotoshogiku let loose with one of his most powerful face-offs of late to get back in the winning column at 3-2. He exploded into top maegashira Takarafuji and plowed forward until it was all over. The grimacing Takarafuji (1-4) had no time to fight back.

Demotion-threatened ozeki Goeido, who dropped to 3-2, never had much of a chance against top maegashira Tochinoshin (1-4), who kept his center of gravity low and his feet placed solidly under his torso as he yanked at the ozeki and toppled him at the edge. Tochinoshin clearly bettered the surprisingly ineffective-looking Goeido on the belt.

Adding more fuel to critics who say he needs to work harder on his basic techniques, sekiwake Ichinojo was grappled out to his third defeat after komusubi Takayasu outmaneuvered him at the face-off and blazed into him from an angle. Takayasu is also 2-3.

Written by The Asahi Shimbun