Okinoumi pulls off another upset to stay tied for Autumn lead

Top-ranked maegashira Okinoumi added ozeki Kotoshogiku to his list of major scalps on Friday to remain unbeaten and tied for the lead on the sixth day of action at the Autumn Grand Sumo Tournament.

Okinoumi looked to be heading for his first defeat of the 15-day Tokyo basho as Kotoshogiku surged forward to put him up against the straw bales.

But the maegashira spotted an opening and turned the tables before taking the relegation-threatened ozeki down with a textbook kotenage armlock throw.

Kotoshogiku, the surprise winner of the New Year basho here in January, dropped to 4-2 in the 15-day event at Ryogoku Kokugikan.

Okinoumi has pulled off a number of giant-killing acts at this tournament, beating two yokozuna and three ozeki.

He is tied at the top with Goeido, who outslugged sekiwake Takayasu (4-2) before bundling him over the ridge. Goeido and Kotoshogiku both need a majority of wins here to retain their ozeki rank for the Kyushu meet in November.

« I have still got a way to go before I have a winning record so have to keep my eye on the ball, » said Okinoumi. « I am trying to keep (being tied for the lead) out of my mind and will just keep on giving my best. »

Mongolian grand champion Harumafuji stayed firmly in the hunt for a second consecutive championship in three-way tie for second at 5-1, posting a controlling win in his bout against third-ranked Takanoiwa (2-4).

Yokozuna Kakuryu beat Brazilian-born komusubi Kaisei (1-5) with a twisting overarm throw in the day’s final bout and is a win further back at 4-2.

Promotion-chasing ozeki Kisenosato (4-2) got a right-handed grip on Shodai’s mawashi and shunted the struggling No. 2 maegashira out to a sixth loss.

Mongolian ozeki Terunofuji took down second-ranked Tochinoshin (1-5) with an overarm throw to improve to 4-2. 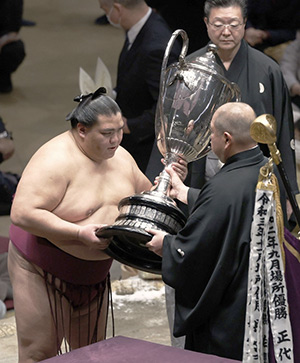