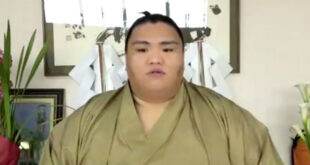 Kakuryu wakes up a winner after lifting Emperor's Cup in Nagoya

Grand champion Kakuryu said he woke up to a blissful Monday morning, after winning his sixth top-division title at the Nagoya Grand Sumo Tournament.

« I woke up feeling really great. I was more focused than usual, » Kakuryu said of his impressive 14-1 performance at Dolphins Arena, in which he denied fellow Mongolian yokozuna Hakuho a record-extending 43rd title.

« This carries a weight that’s different from the rest, » he said when asked how he felt lifting the Emperor’s Cup for the first time at the Nagoya basho, a meet he was forced to sit out of the last three years due to injury.

The 33-year-old Izutsu stable wrestler said claiming the championship was « unthinkable » when he injured his lower back before the start of the July 7-21 event.

But he did the unthinkable by staying healthy for all 15 days of the competition, which saw all four ozeki withdraw prior to the final day, and eventually won his first title in seven grand tournaments.

His last title, at Tokyo’s Ryogoku Kokugikan in May 2018, also came down to the final bout between him and Hakuho.

At Nagoya, Kakuryu’s sole loss came on Day 13 against Tomokaze, who earned the kinboshi prize awarded to a maegashira who defeats a yokozuna in an official bout.

Meanwhile, Hakuho was 12-3 in his runner-up performance. He needed to beat Kakuryu in the final day showdown and win again in a playoff to clinch his 43rd Emperor’s Cup.

Kakuryu has set his sights on a repeat at the September meet, even though he has only achieved back-to-back titles once before in his career. 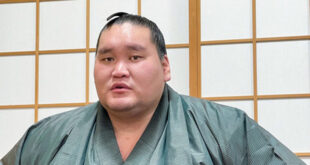