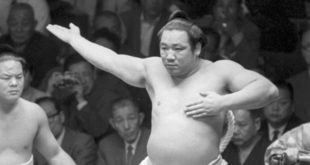 Former yokozuna and 31-time champion Chiyonofuji died Sunday in Tokyo hospital due to pancreatic cancer, a sumo source said. He was 61.

Chiyonofuji, whose real name was Mitsugu Akimoto, was the first sumo wrestler to receive the People’s Honor Award in 1989 and ranks third in championships won behind Hakuho (37) and Taiho (32).

« I liked my stablemaster and he was my idol as a wrestler. I’m really feeling it, » said former ozeki Chiyotaikai, who was mentored by Chiyonofuji, who later became stablemaster Kokonoe. « I took his hand and said ‘thank you for everything.' »

Former Mongolian yokozuna Asashoryu said on his Twitter account, « I can’t stop the tears … My idol and the yokozuna of yokozunas. »

Wrestler Saori Yoshida, the three-time defending Olympic champion in the women’s 58-kilogram division, who was well acquainted with Chiyonofuji, said, « A great person has passed away. I’m definitely going to win a fourth title for him. »

The lean, muscular Hokkaido native, nicknamed « Wolf », Chiyonofuji made his debut in 1970 and was promoted to the sumo’s highest rank of yokozuna after the Nagoya Grand Sumo Tournament of 1981, when he won his second championship in his third tourney as ozeki, the sport’s second highest rank.

Chiyonofuji, who stood at 1.83 meters and weighed only around 125 kilograms even after becoming yokozuna, overcame dislocations on both his shoulders and won 53 straight bouts — the third longest streak since the start of the Showa Era — through the Kyushu tourney in November 1988.

Also known as the « small giant yokozuna, » Chiyonofuji lost on the first day of the 1991 summer tournament to future yokozuna Takanohana (then Takahanada), then 18, and retired two days later at 35 after 1,045 career victories, currently the second most in sumo history.

Chiyonofuji took over the Kokonoe stable in April 1992 and nurtured Chiyotaikai among others before becoming a director of the Japan Sumo Association in 2008.

He had a surgery for pancreatic cancer last year, and has been telling his close associates that the cancer had spread to his stomach and lungs. 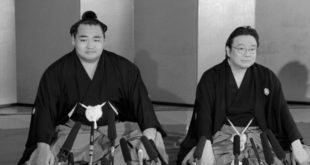